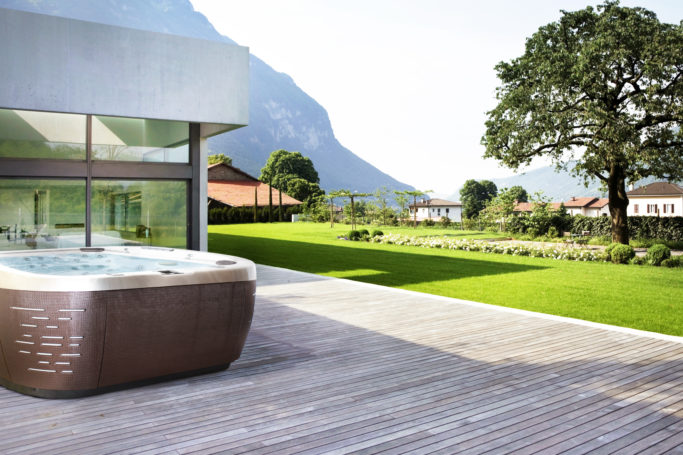 Case study of a Jacuzzi J-335 installation - by Andy McBride I recently sold a Jacuzzi J-335IP to a customer. He has kindly passed on a number of pictures he took whilst the delivery team were installing for him.

This is what happened…. A couple of months ago Les came into the Jacuzzi Hot Tub showroom at Ryton-on-Dunsmore. He had previously owned a hot tub and now wanted to have the best. He was looking at a number of manufacturers. We have a large display of Jacuzzi in our Warwickshire superstore and I showed Les the full range. After consideration he said that he liked the J-335IP as it had the things he was looking for such as the hydrotherapy jets. These are the Power Pro jets that are exclusive to Jacuzzi. He also liked the quality of the Jacuzzi including the Bluewave sound system and the look of the J-300 range. He decided that he was not going to purchase right away as he preferred to compare other hot tubs from other dealers. I gave him a brochure with our web site details for further information and my email address should he wish to contact us. About two months later Les came back and we talked about what he had found in his search for a hot tub. He said he thought the Jacuzzi was as good as anything he could find. He liked the way that Sapphire Leisure seem to be professional and that he did not find this at some of the other places he had visited. He mentioned the showroom looked ‘clean and well laid out - first impressions are very important to me’ he said. He also said that he had looked on the web site and social media and has seen good customer referrals that were useful. He said ‘ I told you I would be back’ and I would like to look into the J-335IP further as the size is about right. I showed Les a demo of the wet Jacuzzi a J-355IP. It is similar to the J-335IP he was looking at. Les wanted more time to consider the purchase so he went away to think. Sometime later he came back and placed a deposit for the Jacuzzi J-335IP in Silver Pearl and Teak. After placing the order I went to carry out a site survey at his home. This is something we do to ensure everything goes smoothly on the day of installation. There were some things that required changing for the Jacuzzi J-335 installation to run smoothly. Such as removing a gate post and putting in the correct electrical supply. All the information was conveyed and the customer was happy that a crane would not be required! On the day of the Jacuzzi J-335 installation, Les kindly took a number of photos of the delivery team at work. Showing how we install our hot tubs professionally. He was so pleased with the delivery that he came into see me to say what a fantastic job they had done. Les said that it was worth doing the initial site survey so the install was easy and on the day. He said ‘I could not praise the delivery guys more, they were brilliant’. The Jacuzzi was filled and James (head of the delivery team) went through all the workings of the Jacuzzi and the chemicals. A full demo of the Jacuzzi was completed so the customer knew how to use it. After another week or so Les came back into the showroom and purchased a waterproof TV to go with the Jacuzzi. He said he is very pleased with the Jacuzzi and would recommend anyone to Sapphire Leisure. Andy McBride (Director)

Jackie and I wanted to say a big thank you for our new Jacuzzi. We really liked James, he was very professional and did a great job with the delivery and installation. His explanations for the running/ maintenance etc was second to non.

We just wanted to drop you a note of sincere thanks for your help, support and advice. From our first visit to Andy at the Showroom right through to your engineer showing us how to operate our Jacuzzi it has been an easy, and fun experience.

All three were polite and positive all working as a team. James was informative and passed on everything we needed to know. We love the Jacuzzi and because of James careful instruction it is working perfectly and we are confident applying the future chemicals. Thank you for an efficient and value service.